Of PR and Principles

The new edition of Get Clients Now! got a mention in the current issue of Businessweek. Terrific news, right? Well, that depends. If you believe the aphorism “all PR is good PR,” this is a great thing. If you don’t, well… 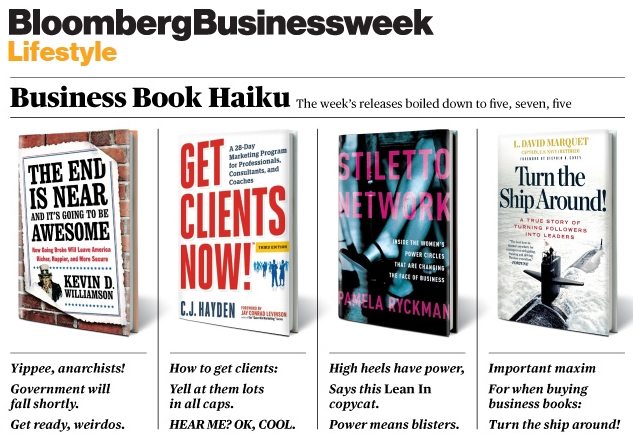 The book was featured in the “Business Book Haiku” section, where each book is described with a humorous haiku. Here’s the haiku composed for Get Clients Now!:

How to get clients:
Yell at them lots in all caps.
HEAR ME? OK, COOL.

Not exactly what my book is about. In fact, you might say it’s the antithesis of my marketing philosophy. And at the same time, it’s still a mention in Businessweek.

When I found out about it this morning, my first instinct was to thank the person who told me about it, sulk for a bit about the state of the world (e.g., too much entertainment; not enough attention on real issues), then try to never mention it again. But then I reconsidered. I walked through in my mind the likely results of this item.

If I told my friends and followers about it, most of them would never look at the piece itself; they’d just congratulate me on it and get a sense it meant my book was doing well. If they did read the item, they would take it with a large grain of salt, because they already know my work. So it seems that telling my peeps about the piece would be OK.

Now, what about the rest of the world — the people who don’t know my book or my work — who might first encounter it via this item? I suspect some of them would simply chuckle, as they might at the entries for other books featured here. (E.g., “Yippee, anarchists! Government will fall shortly. Get ready, weirdos.”) But then they might be intrigued as to what my book was really about. I noticed I felt curious myself about the content of the other books, and wasn’t put off by the silly haikus.

But then there are those other strangers who might read the haiku for my book and think, “Good grief! Another book about hype-laden marketing? Puh-leeze!” And they wouldn’t consider exploring it further. Hmm, but how does that harm me, really? Or anyone else, for that matter? First of all, I agree with those people! The last thing the business world needs is more books about how to produce hype. Secondly, if they discount my book because of that perspective, will they even remember it? Probably not, so really, no lasting harm has been done.

And finally, I can’t change the fact that this item appeared in Businessweek, or anything about its content. Feeling annoyed about it would just be a cause of stress and a distraction from my agenda. Telling my peeps about it makes sense. Letting go of it after that makes sense, too.

The point is that I had to think about it. Before I chose to act or to stew about this event, I checked in with my values and higher purpose. I don’t always remember to do that, but I am always grateful when I do. Now I can go on with my day without second-guessing myself about what I did or didn’t do.

Sometimes it seems that keeping your business true to life takes up extra time — having to think things through, for example, instead of leaping into action. But as I think over my two decades as an entrepreneur, I have ultimately been plagued much more by actions I took — and later regretted — than I have by actions I didn’t take.

Is all PR good PR? No. Is a few minutes spent pondering one’s principles in the morning a good thing? Yes.